2016 is, as they say, in the books (almost – if you exclude the Emperor’s Cup). A year of surprises, and non-surprises. A year of ups & downs. And a year in which the J.League stole a little bit of attention in the minds of the footballing world.

This is the last piece to be put on the site this year, so it makes sense just to have a look back at the year that was in Japanese football.

After beating the champions of Oceania, Africa & South America, Kashima Antlers took it to UEFA Champions League winners Real Madrid in the final of the CWC, pushing Zinedine Zadane’s men all the to extra time before succumbing to a 2-4 defeat – a scoreline which included a Cristiano Ronaldo hat-trick.

It wasn’t lost to the football watching public however, that Kashima played exceptionally well. The spine of Antlers’ team was superb, from Sogahata in goal, Gen Shoji & Naomichi Ueda in defence, to Ryota Nagaki & Gaku Shibasaki in midfield and Mu Kanazaki up front, Kashima showed real tenacity & skill. Shibasaki took the plaudits (although some of the OTT praise was a bit embarrassing) for his two goals, and who knows what might have happened if Real defender Sergio Ramos had been rightfully shown a second yellow card in the dying stages of normal time?

Check out the photo gallery of the match!https://t.co/5TBV0S4WlZ #antlers pic.twitter.com/DV03c3gqUt

In any event, Kashima showed that there are some decent players in Japan. Kudos to them for that.

Just look at the split:

In the second half of the J2 season, they got Genki Omae back from injury and his partnership with North Korean forward Chong Tese fired the Shizuoka club to automatic promotion. In fact, Omae & Tese scored 46 goals between them this year. Tese was unquestionably dominant at J2 level, but with he & Omae partnering up again for another crack at J1, things are looking up for Shinji Kobayashi’s men next year.

It wasn’t so long ago that Oita was producing some very good players and were playing in J1. In 2015 they were relegated from J2, and many people wondered what would happen to the club. It was a pertinent question, as they had a pretty big wage bill, played in an enormous stadium and looked like they could be in a rut.

What happened was that all facets of the club came together. Firstly, some smart moves were made in the player department. Talented FC Gifu youngster Takumi Kiyomoto was brought in to add some flair to what had been a depressingly negative side in 2015; young forward Yusuke Goto started to make good on some of his promise as he scored 14 goals and the team also saw the development of young defender Yoshinori Suzuki, a virtual ever present in the league campaign.

Off the pitch, a huge effort was made to mobilize support. Oita averaged 7,770 at home games – which is more than a lot of J2 sides managed. A lot of that can be attributed to the hard work that the promotions/marketing department did in making the people of Oita realize that their club needed them. Also, winning football helps, people get tired of watching defeats and so this upturn in form – albeit against inferior opponents – made people enjoy going to the stadium again. One of J2’s most interesting storylines next year will be how they fare upon their return.

On November 12th, Roasso Kumamoto secured a 1-0 victory at home against then fellow relegation candidates FC Gifu – a win that secured Roasso’s J2 status. Saying that this year was a tumultuous one for the club from Japan’s southern island of Kyushu would be a huge understatement. On April 16th, a magnitude 7.0 earthquake struck the city of Kumamoto and surrounding areas.

Dozens of people lost their lives. Thousands of homes were destroyed. The iconic Kumamoto Castle suffered structural damage. Flights were canceled because of damage to the airport terminal. The Kyushu Shinkansen stopped running due to fears of the structural integrity of Kumamoto Station. People lived in their cars, afraid of the impact that aftershocks could potentially bring.

It was in that context that Roasso Kumamoto had to play out the remainder of their season. The club, led on the field by the excellent Koki Kiyotake, and off the field by de-facto “face of Roasso” Seiichiro Maki, got over the initial shock of what had happened, got over the fact that they had to play “home” games away from. Got over the fact that they had to deal with a fixture pile up. They – the team & the city – came together and pulled through. One thing is for sure, they will be happy with a far less eventful season next year. 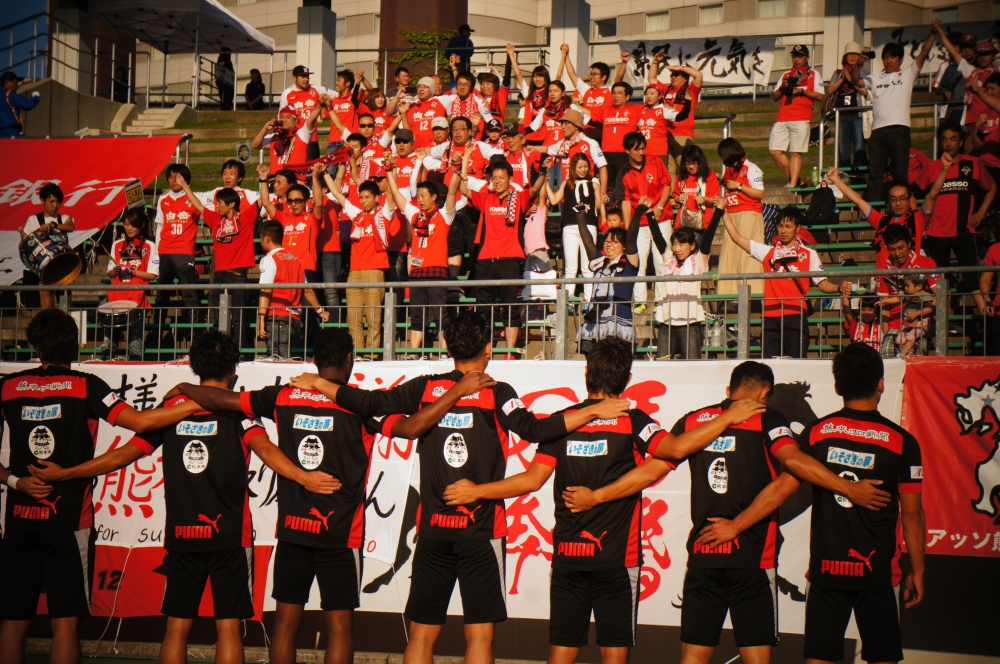 Not a lot really needs to be said about this, except for the fact that every team should aspire to a stadium like this. No running track, perfect sight-lines and a superb visual effect when seen on TV. Of course, not everyone is backed by a huge electronics firm & the local authority (ask Sanfrecce, they only have half of that combination) but it doesn’t stop teams from trying.

It wasn’t full very much this year, but Gamba’s average attendance rose by 10,000 people. It’ll be full next season on at least one occasion – when the pink side of Osaka make the trip to Suita Soccer Stadium.

Much has been said about this – even on this site. I have to put it in here htough, because I’m sure it still leaves a sour taste. The team with the most points didn’t end up winning the league. Still seems slightly surreal in this day & age. It will be a year that Urawa might take a while to get over.

The stagnation of JEF United

JEF United finished in 11th place in J2 this year. An almost (and I stress the word almost…) unfathomable result from a squad which included Takayuki Funayama, Haruya Ide, Yamato Machida among others. They surely had one of the highest wage bills in the division but they finished below the likes of Yokohama FC & Tokushima Vortis.

We keep expecting big things of JEF, but we should know better. They are an average J2 side with a nice stadium. I’m done with expecting more from them.

In one the crueler twists of fate in Japanese football this year, Giravanz will open their brand-spanking new stadium – called Mikuni World Stadium – in J3 after a horrendous campaign that left many people scratching their heads at why it went so wrong.

Hopes were high coming into this campaign that Kitakyushu, if not challenge for automatic promotion, could very easily make the play-offs. They were coming off a campaign where they finished 7th, and they brought back the core of that side. Rui Komatsu & Kazuki Hara, their difficult to deal with forward pairing were reunited with Tomoki Ikemoto (back from Matsumoto), and the Koki’s of Kotegawa & Kazama gave Giravanz a seemingly exciting midfield lineup. 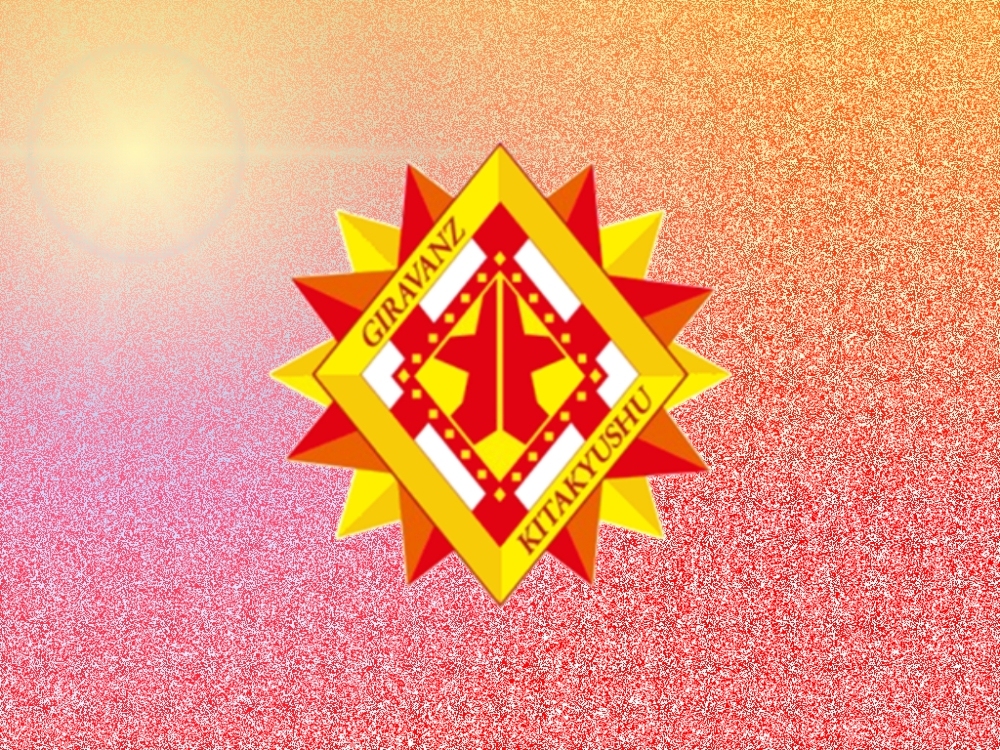 It is difficult to say what went wrong, but the lack of goals from Hara & Komatsu was telling. They proved very easy to score against and a lack of continuity in defence surely contributed to that (only one defender played more than 26 games). We, as observers, kept expecting them to get out of the rut, but it never happened and they were relegated on the final day of the season when they meekly surrendered to a 0-3 defeat at Montedio Yamagata.

They’ll start J3 at the heavy favourites to go straight back up, but just because you have a beautiful new stadium it doesn’t automatically entitle you to promotion. Just ask Nagano Parceiro…..

So, that puts a bow on J.League Regista’s coverage for 2016. It has been fun to do. Busy at times, but a lot of fun. It was great to connect supporters of the J.League from all across the globe, and to provide a space for those people to write to write on something they like was very fulfilling for me.

This site will be taking a break now (I want to say well earned,but I’m sure that is applicable) but hopefully we’ll be back in the new year sometime.

Thank you to everyone involved here – and we wish you a very happy & healthy new year.